This animal is well known for its super long neck and towering height – it is the tallest land animal in the world, after all, so that isn’t much of a surprise.

I bet you already know who I’m talking about – it’s the giraffe! 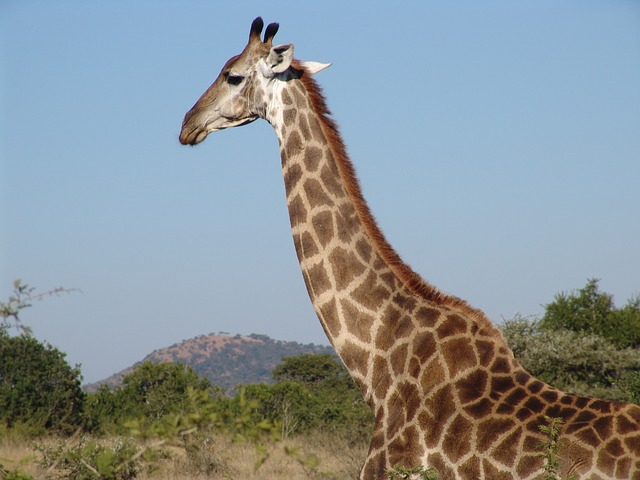 Native to the continent Africa, there are many other interesting things to learn about this amazing animal besides the obvious.

Read these very interesting facts so you can surprise your friends and family with your newfound giraffe knowledge.

Where do Giraffes live?

Giraffes like to live in very dry climates! You can find them in savannas, grasslands, and open forests.

Since giraffes are native to Africa, a very hot and dry place, they can definitely take the heat! 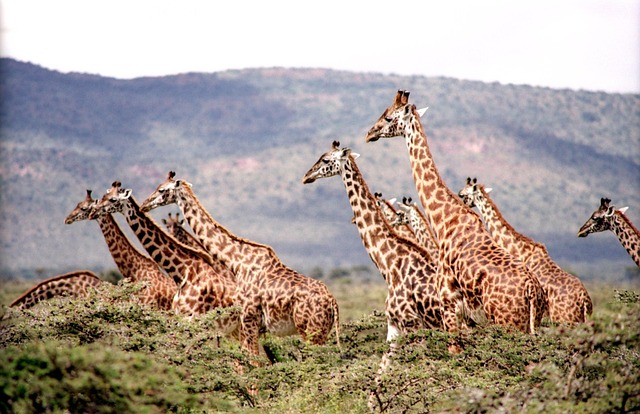 Giraffes like to roam and browse for their food, with Acacia leaves and shoots making up the bulk of their diet. They also enjoy leaves, herbs, and vines.

Despite popular belief, most giraffes do not eat very much grass.

Giraffes do, however, spend a lot of their time eating in general and can consume a whopping 100 lb of twigs and leaves a day.

it has been estimated that during certain times of the year giraffes spend 75 percent of their time roaming for food and eating!

Giraffes don’t need much water despite being extremely large! Partly because they are able to use water from the plants they eat.

They only take the occasional drink (about once every few days), so they are often found far away from water sources. 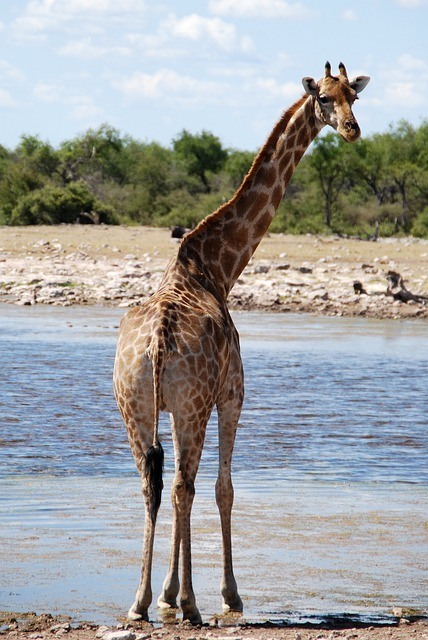 How tall are giraffes?

As we mentioned, the giraffe is the tallest type of mammal in the entire world. Do you realize how many tall mammals there are?

The legs of a giraffe average about six feet (1.8 meters) – that’s actually taller than many humans! 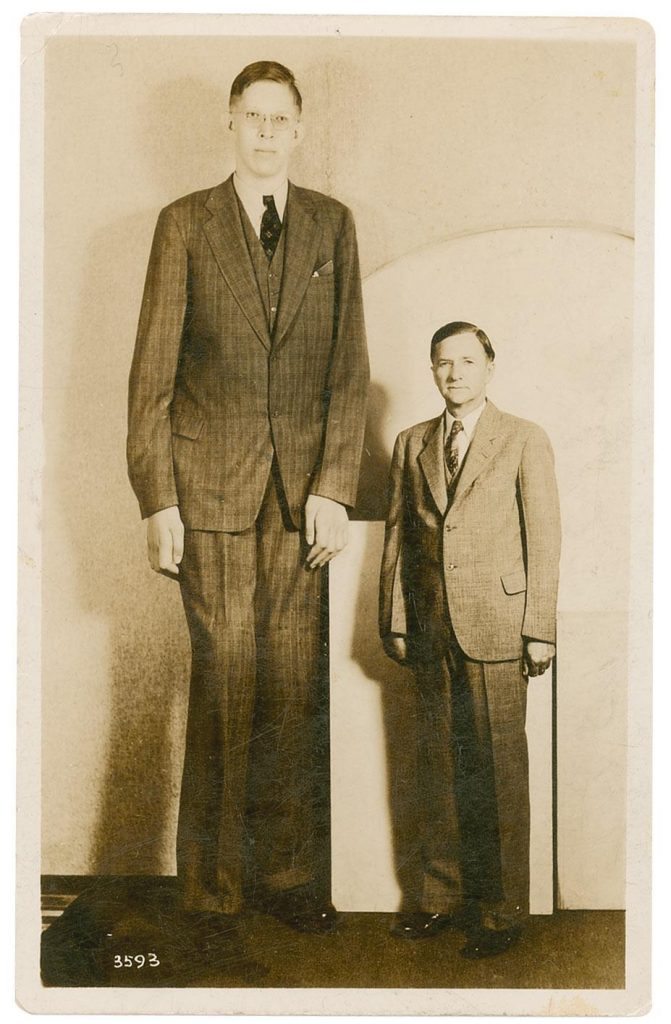 Giraffes also have the longest tail of any mammal. Their tails can be up to 8 feet (or 2.4 meters) long.

Even though giraffes have very long necks their necks are too short to reach the ground because of their tall height. 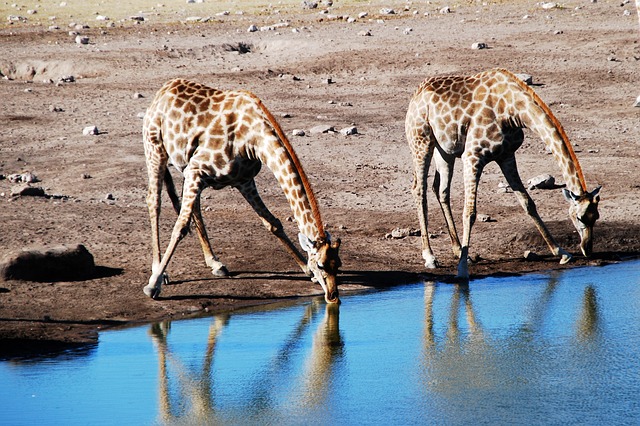 Giraffes aren’t only tall, they can weigh quite a lot, too! The average male giraffe weighs between 2,400 to 3,000 pounds, while the average female can weigh anywhere from 1,600 to 2,600 pounds!

Giraffe is the 3rd heaviest animal in the world, after Elephants and Rhinos.

The spots on a giraffe are very distinctive, and look like human fingerprints. Interestingly enough, no two giraffes have the same set of spots.

Just like two snowflakes or sets of fingerprints are not the same either! Now that’s pretty cool, isn’t it? Even the giraffes are telling us that being unique is awesome! 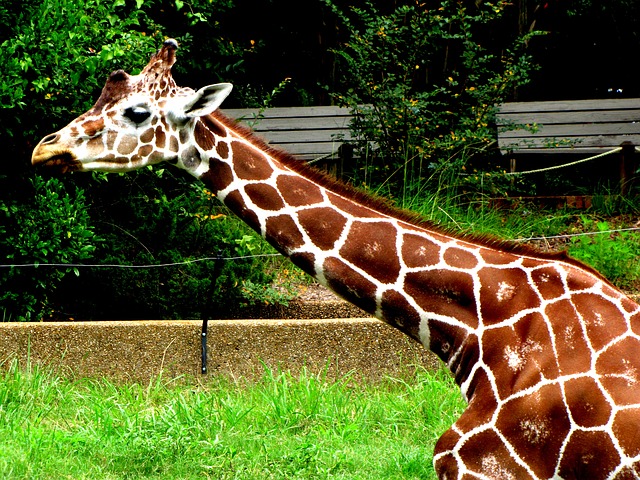 The Giraffe has a very long neck that can stretch over 7 feet long, which is nearly half it’s overall height.

The long neck gives the Giraffe a slender appearance, even though the rest of its body is muscular and strong. 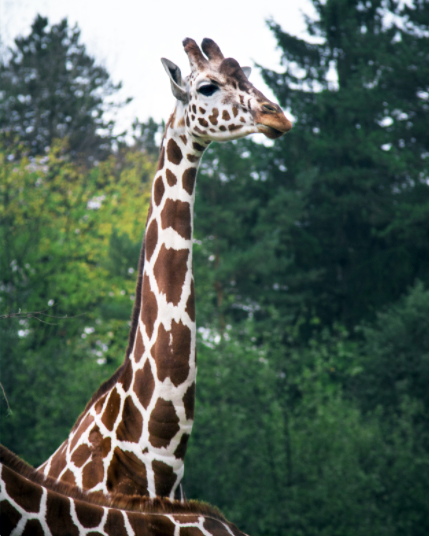 Giraffes have long tongues that can grow over 50 cm. They use these massive tongues to pull down leaves efficiently. 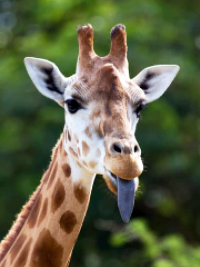 Their tongue is a peculiar bluish black and purple color. Many think that this dark pigmentation is to protect their tongue from the Sun while they munch leaves from the top of the trees.

Compared to the human heart that weighs just 0.7 lb , the Giraffe’s heart is truly massive and weighs as much as 25 lb.

Giraffe’s heart is the second heaviest of all land animals, just after the elephant.

For sheer size,  it is the biggest, and no other land animal has such large heart size, not even the elephant.

Their heart pumps 60 liters of blood every single minute.

With hooves (30 cm) the size of a dinner plate, they are able to maintain balance despite their great height. 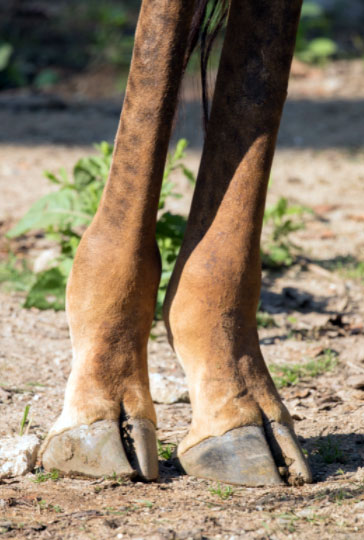 Their massive legs, strong foot and big hooves make for a powerful kick. They can and have killed lions with a single kick, yes! just one kick!

Those wide hooves also keeps them from sinking into loose sands.

Both male and female giraffes have two horns on their head.

These horns are called ossicones and many males giraffes have thicker, less hairy ossicones than female giraffes. This is due to the sparring they do with other male giraffes.

Female Giraffe’s stand and give birth to baby giraffes. What this means is their babies get the 1.8 meter drop at birth – aahh!

Giraffe calves are already big at birth. They weight 100 lb and are close to 2m tall right after birth.

Giraffe calves live with their mother till they are 1.5-2 years old. They mature at 4 years and are considered fully grown at 6.

Giraffe calves depend on their mother for protection, many don’t live past 1 year, due to predation from lions.

Adult male Giraffes are large and imposing. A single lion or hyena is no match. It would take a full pride of lions to take one down, and even then many such attempts are unsuccessful.

The Giraffe uses its height and excellent eyesight to spot predators like lions and hyenas from far.

Giraffe’s mass and legs also work as defenses, they can stomp and kick predators to death. Adult giraffes are not easy lunch and most predators don’t bother, unless there is a giraffe calf with the adult.

Animals like antelopes and zebras often graze near Giraffes to benefit from the giraffes ability to spot danger from a distance.

How long do Giraffes live

In the wild these gentle giants live for around 25 years, but in captivity few have lived over 40.

Giraffes are sensitive, gentle, social and friendly. They are not aggressive by nature, but do not usually like to be touched.

There are some zoos that allow people to feed adult giraffes.

Here’s a funny mental image – giraffes, despite being very tall and very heavy, can run pretty quickly for their size!

You can thank those long legs for that ability!

Believe it or not, giraffes spend most of their lives standing up. Yes, you read that right! Giraffes can even sleep standing up. Don’t try that one at home!

Actually, giraffes don’t sleep that often anyway. Many giraffes only require 5 to 30 minutes of sleep in a 24 hour period, which of course is far less than the 7 or 8 hours we humans need.

Believe it or not, giraffes can stand up within an hour of being born! They’re pretty far ahead of us humans aren’t they? 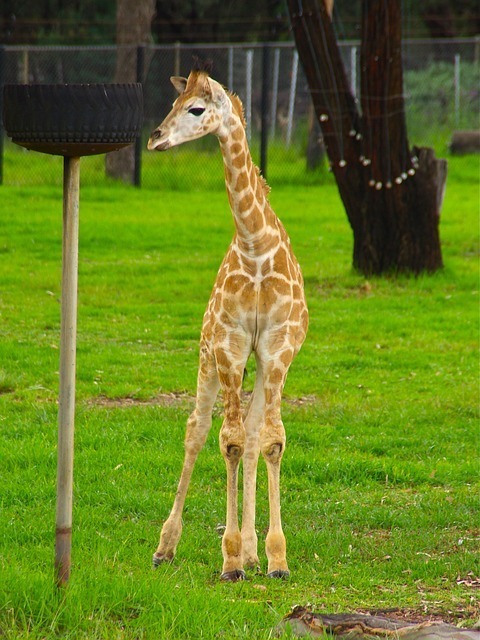 A giraffe’s heart is typically 2 feet long and weighs around 25 pounds (11) kilogram, the biggest heart of any land animal.

A giraffe’s heart weighs the same as the average two year old!

It was initially thought that Giraffes don’t make sounds, but now it is well accepted that they bellow and make flute like sounds, and that a lot of their sounds are beyond range of human hearing.

Certain kinds of giraffes are now endangered – this means they are at danger of becoming extinct.

The West African giraffe and the Rothschild’s giraffe are both endangered. As a whole, the population of giraffes has decreased over the years, making some animal conservationists very worried.