Though they are never going to be called cute or cuddly, Scorpions sure are interesting! They are arachnids, making them close cousins to spiders.

They are also arthropods because they have two pedipalps (pinchers) and a tail with a stinger. 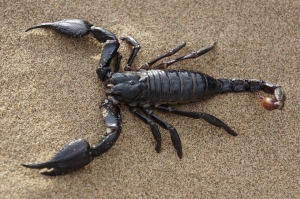 These creepy crawlies like to live where it is warm and can be found on every continent, with the exception of Antarctica. There are about 2,000 different kinds of scorpions out there.

Scorpions do not lay eggs. Rather, they give live birth. Even though they might look pretty scary, they are really good moms and will usually let their babies ride on their backs for protection.

Scorpions are carnivorous. They will eat insects, spiders, other scorpions, lizards, and even small mammals.

Scorpions do not have any internal bones. Instead, they have an exoskeleton, or a hard shell, on the outside of their bodies.

All scorpions are venomous, but only about 25 of the 2,000 known species have venom powerful enough to be fatal to humans.

Their stings still hurt a bunch though, so it is best to give them their space.

Scorpions can live for a really long time. They can live as long as ten years in the wild! In captivity, they have been known to live for up to 25 years.

Scorpions are mostly nocturnal animals, which means they like to hunt at night. This is mostly due to the harsh climates that they live in, such as deserts.

If you shine a UV light on a scorpion, they will glow in the dark.