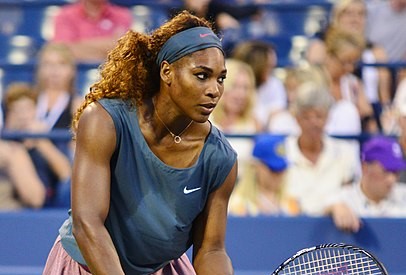 Serena Jameka Williams is a professional tennis player.  She was born on September 26, 1981, in Saginaw, Michigan, in the United States, and her dynamic playing style changed women’s tennis. California’s Compton was Williams’ hometown. Her parents, Richard Williams, who owned a security agency, and nurse Oracene Price, and Venus Williams, made up the family. Although Serena and Venus Williams’ parents encouraged them to play tennis, Richard Williams was primarily responsible for teaching the two women the game by taking them to the local public courts. The sisters practiced for a long time since he was a tough coach.

In 1995, Serena Williams began her career one year after her older sister. They quickly drew a lot of attention due to their tremendous serves, groundstrokes, and exceptional athleticism. Many believed Venus would be the first Williams sister to win a Grand Slam singles championship, but Serena did it by winning the U.S. Open in 1999.

Serena Williams won the U.S. Open at the age of 17

Serena’s maiden Grand Slam singles victory came in 1999 when she won the US Open. As a result, she became just the second African-American woman to triumph in a singles Grand Slam match. Williams, then just 17 years old, defeated Swiss Miss Martina Hingis in the 1999 US Open championship match, 6-3, 7-6. (4). Williams won the tournament’s final five matches by defeating several players, including Kim Clijsters, Lindsay Davenport, and Martina Hingis. It was a championship run befitting an icon.

Serena’s longtime love of design inspired her to enroll in fashion school, which she did between victories in Grand Slam tournaments. She studied fashion at The Art Institute of Fort Lauderdale from 2000 to 2003. This does not imply, however, that she was not pursuing her love of tennis. As she noted, she had always loved mathematics and the technical parts of the skill of pattern building, and she excelled at it while attending this institute. After completing her studies at the fashion institute, she started a line of evening apparel. Her attempt at fashion design was a failure, and the line gradually faded. At this time, tennis finally gained precedence, and Serena returned to the courts, winning trophies by the dozen and building her empire!

S by Serena, Williams’ sustainable apparel business, debuted its inaugural collection in the fall of 2019. S by Serena designs, inspired by 1990s street style, are displayed on various body shapes and sizes (from XS to 3X), showcasing the line’s emphasis on inclusivity. She described her clothesline as being for self-assured women when speaking to Elle about her new endeavor. She wanted a company planned for when she stopped playing competitive tennis because she knew she couldn’t play the sport forever.

The Williams sisters’ arrival on the women’s professional tennis circuit is credited with bringing a period of strength and athleticism. Williams is regarded as one of the best women’s tennis players of all time. In terms of overall major titles won, she ranked second in the Open Era and tied for third overall. She is also the most recent woman to win the Surface Slam; these consist of major titles on various playing surfaces in the same year. She did it in 2015. Williams is also the most recent woman to simultaneously hold all four major singles titles (2002-03 and 2014-2015). Along with Venus, she is the most recent player to have all four prominent women’s doubles titles at once (2009–10).

Serena Williams, a tennis legend who has won nearly a record of Grand Slams, is undoubtedly one of the best athletes. Serena has won a total of four medals, all of which are gold, at three different Olympic Games.  She ranked among the most decorated tennis players in Olympic history at the time of her last gold medal in 2012.

Serena’s winning streak started at the Sydney 2000 Olympics, where she and her sister Venus won their maiden Olympic gold medal in the doubles competition. While Venus and Serena returned to the 2008 Olympics in Beijing after Serena opted not to play in the 2004 Olympics, the sisters were once again a force on the court, winning their second gold medal. The London 2012 Olympics, though, were Serena’s time to shine. Serena and Venus not only successfully defended their doubles title, but Serena also won the women’s singles gold after overcoming seasoned rival Maria Sharapova in the championship match.

You can also checkout our article on Interesting Soccer Facts for Kids.

Serena Williams is a vegan.

Serena Williams eats primarily vegan food. Williams follows a plant-based diet while training and competing, but she relaxes her diet during the off-season to incorporate protein and indulgences. Serena changed to a green diet after being persuaded by tennis pro and sister Venus Williams. The 39-year-old has been adhering to the regimen since 2017 to aid her sister in the fight against Sjogren’s syndrome.

Serena Williams was the highest-paid female athlete in the world in the years 2016 and 2017.

Serena earned about $29 million in a single year, making her the highest-earning sportswoman in the world in 2016. With $27 million in prize money and endorsements, she maintained this record in 2017 when she was the only female on Forbes’ list of the 100 highest-paid athletes. She came in at number 28 on Forbes’ list of the highest-paid athletes in the world in 2021. Despite her status and wealth, she is renowned for her charitable contributions. She has collaborated with various charities and non-profits and contributed money to numerous causes. She was a founding member of Kenya’s Serena Williams Secondary School, inaugurated in November 2008.

Awarded annually, the Laureus World Sports Award for Sportswoman of the Year recognizes the accomplishments of sportswomen from different sports fields. Daimler and Richemont, supporters of the Laureus Sport for Good Foundation, founded it in 1999. The Laureus World Sports Academy then chooses the winner and is honored at an annual awards event hosted in various venues worldwide with a Cartier-made Laureus trophy.  The honors are regarded as highly prestigious and are usually referred to as the “Oscars” of sports. Serena has received the Laureus Sportswoman of the Year award four times (2003, 2010, 2016, 2018).

Check this article on soccer facts.

Serena Williams is the only female tennis player to have won more than $50 Million in prize money.

Serena Williams has received far more prize money than any other female athlete. She earns more in her career than her sister Venus, who came in second. In the Women’s Tennis Association (WTA) history, about 25,000 women have won prize money. Serena Williams has earned more than the combined earnings of the bottom 80% of those players. Williams currently maintains the top rank among female athletes in terms of prize money won, having earned nearly $94.5 million.

Serena has played over 60 Grand Slam Tournaments and has won 23 out of them, making this the most won by any player in the Open Era and the second most of all time. Serena holds the most notable titles among active players, with a total of 39 over singles (23), doubles (14), and mixed doubles (two).

Serena Williams is the oldest female tennis player to reach the No.1 ranking.

Serena ranked at the top of the singles leaderboard for six years including a joint-record 186 straight weeks, and she was crowned year-end No. 1 by the Women’s Tennis Association (WTA) five times. Serena Williams became the oldest tennis Grand Slam singles champion when she won her record-breaking 23rd Grand Slam championship at the age of 35 years and 124 days (female). The date of this achievement was April 24, 2017.

Williams retired from her tennis career after the 2022 U.S. Open. In a recent interview with Vogue, the professional athlete posed for the cover of the magazine’s September 2022 issue while discussing the crossroad she is at regarding her tennis career and family. Williams notes that she can’t seem to find any joy in the subject, explaining that t is difficult to imagine that she has reached such a moment. At some point in the interview, she noted that she couldn’t wait to finish her tennis career while remaining excited and optimistic about what comes next.

Serena Williams revolutionalized women’s tennis with her powerful style of play and by winning more Grand Slam singles titles than any other player during the open era. She has done more for the sport than any other player, and she will go down in history for her athleticism, incredible sportsmanship, courage, and unparalleled spirit!