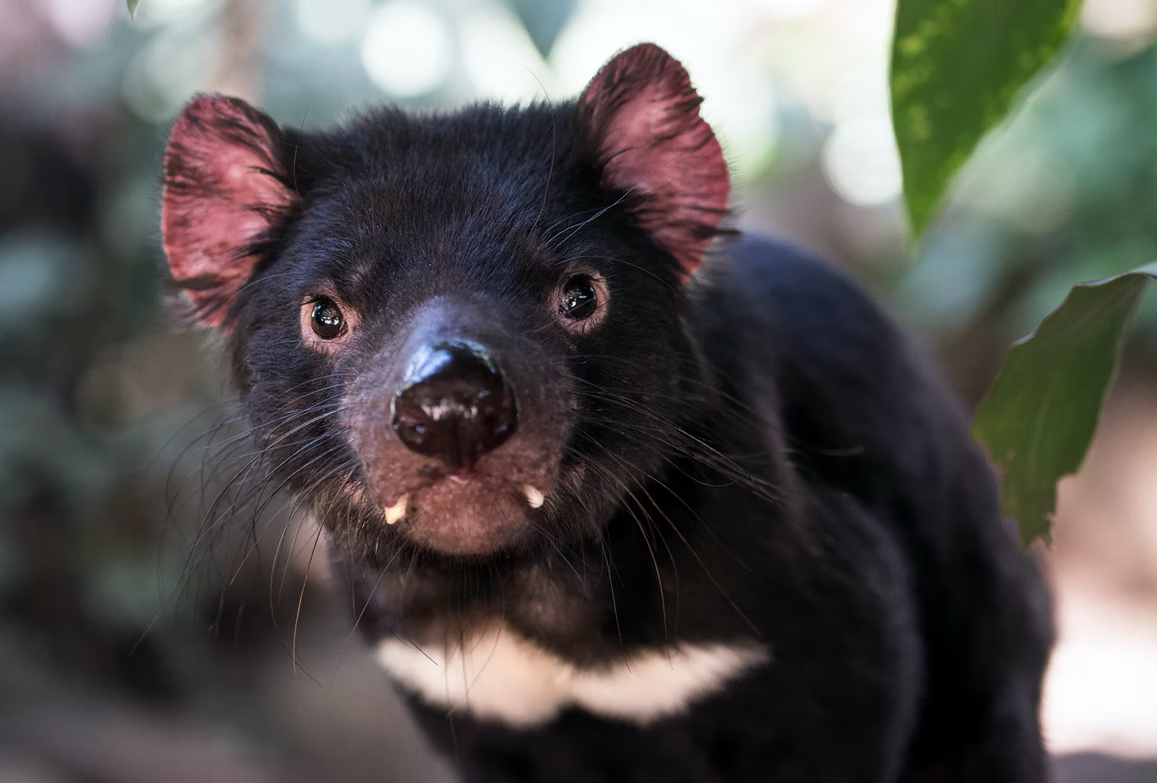 The name makes it sound scary, but the Tasmanian Devil is actually an adorable mammal! But don’t let their cuteness fool you, for they can also be quite feisty. They are the size of a small dog and belong to a class of mammals called marsupials. They are also carnivorous. Let’s learn more about these animals!

The Tasmanian Devil has a broad head, thick build, and a long tail. The tail is almost as long as half of its body. Its forelegs are slightly longer than its hind legs. Devils have coarse brown or black fur, with some white patches on their chest. This gives them a pudgy look, making them seem like small dogs or bears.

How big does a Tasmanian Devil get?

What do Tasmanian Devils eat?

Tasmanian Devils are strictly carnivorous. This means they only consume the meat of other animals. While they can prey on animals as big as a baby kangaroo, they usually eat small prey or animals which are already dead. Dead animal matter is also called carrion. They typically eat in groups of 2 to 3.

The prey of Tasmanian Devils mainly includes wombats and smaller mammals like wallabies, bettongs, and potoroos. They also eat domestic mammals like sheep and rabbits, fishes, and birds – including penguins! Sometimes they also feed on frogs, reptiles, insects, and even fruits and vegetables.

In recent times, Tasmanian Devils have adapted themselves to feed on animals killed in road accidents. Sometimes, they will even dig up dead animals to eat them! Tasmanian Devils aren’t picky eaters either. They’ve been known to devour entire small mammals, bones and fur included!

Where do Tasmanian Devils live?

As their name suggests, Tasmanian Devils are native to the island state of Tasmania, in Australia. However, to aid in increasing their numbers, a small population has also been introduced in New South Wales.

Tasmanian Devils are commonly found in areas with low to moderate rainfall. They prefer dry forests and coastal woodlands. Some Devils also live near urban areas, where they have more chances of getting roadkill.

In the wild, the Tasmanian Devils have an average lifespan of 5 years. The longest living Tasmanian Devil was Coolah, born in the Cincinnati Zoo and later sent to the Toronto Zoo. Coolah lived for 7 years in captivity, from 1997 to 2004!

Tasmanian Devils are nocturnal, while young Devils are crepuscular. But what do these big words mean? Nocturnal means that Devils are active and on the hunt during nighttime. Crepuscular means that when they’re young, they are most active during twilight hours.

During the day, they spend more time in dense bushes, hollow logs, caves, or holes. Some Devils also like to rest in the sun! It is thought that Tasmanian Devils hunt during the night to prevent being eaten by eagles or humans.

Tasmanian Devils make a range of calls and noises, but they are most easily recognized by their loud screeches! These screeches include raspy screams, growls, grunts, snorts, and shrieks! They often make these sounds while feeding at night.

Tasmanian Devils mainly produce these sounds while fighting off other Devils from stealing their food or to scare away predators. However, some calls are actually made to invite other Devils to eat with them to not waste any food! It is thought that they were named Devils when Tasmanian people in ancient times heard them making these strange noises at night!

The Tasmanian Devil has a large head and a wide neck. Due to this, their bites are actually the strongest in the mammalian kingdom, compared to their body size. Their jaws can exert a force up to 553 Newtons!

To bite, the Devils can open their mouth wide – about 75 to 80 degrees. The power of their bite is enough to even crush the bones of their prey. Some Tasmanian Devils have been known to escape from cages by biting away the thick metal wires!

Tasmanian Devils eat animal carrion by first ripping out the digestive organs since it is the softest part of the body. However, after feeding, they become bloated and lazy. This leads to some interesting behavior!

The Devils are often found residing and sleeping inside the cavity they make in the rotting carcasses. After entering, they slowly feed on the prey from the inside. They can sometimes continue this for days!

Young Devils sometimes climb trees. There, they will often feed on insects and bird eggs! Sometimes, they can even capture live birds. On average, they can climb trees 3 to 4 meters tall. However, this stops once they grow older and larger. Adult Devils can sometimes eat the young ones, so climbing trees also help them be safe!

Yawning when in danger

Tasmanian Devils are usually shy and timid. When they feel they’re under attack, they will often do strange yawns. This makes them look fierce and scares away their predators. However, the Devils actually yawn out of anxiety, not anger!

Tasmanian Devils have a total of 42 teeth. They have four pairs of upper incisors and three pairs at the bottom. These teeth are located at the front of their mouth. They also have prominent canines and cheek teeth. Their teeth are very efficient at tearing and chewing meat.

Fat Storage in their Tails

Like other marsupials, Tasmanian Devils also store fat in their tails. As they feed, their tails grow fatter. They can eat up to 40% of their weight in one feeding, which makes their tails very plump! It is thought this also helps them balance while walking.

The number of teeth a Devil has is the same as a dog. But unlike a dog or even humans, their teeth don’t get replaced after birth. Instead, the teeth keep growing throughout their life! However, this growth is very gradual.

Breeding and Reproduction in Tasmanian Devils

Tasmanian Devils mature at the age of 2 years. They mate between the months of March and April. Males fight among themselves since the female only mates with a powerful male. Mating can continue for up to 8 days! Males can produce 18 kids in their lifetime, while females can have 12.

Tasmanian Devils are marsupials, which means they share many characteristic traits. Their pregnancy rates are high. Their gestation period is small, at about 21 days. They give birth to 20 to 30 babies at once.

But the most famous trait of marsupials is their pouch! Females have a pouch on their rear, present since birth. This is to hold their babies, who are born very soon and so need protection. After being born, the young Devils will move inside this pouch and reside there for the next 100 days!

Baby Tasmanian Devils weigh around 0.0006 to 0.0008 ounces at birth. They have strong front limbs and developed claws, so they can climb into their mother’s pouch. Their eyes are just spots, and they have pink bodies.

What are they called?

Baby Tasmanian Devils are known by several other names. These include pups, joeys, and imps.

Why are Tasmanian Devils endangered?

The Tasmanian Devils were classified as endangered in 2009. Their populations have declined due to many causes. It is estimated that only ten to fifteen thousand Devils now reside in the wild.

Tasmanian Devils are illegally hunted in many parts of Tasmania. This has a variety of reasons, including for food, to protect livestock, and their teeth used to make jewelry. They are also very likely to be killed in motor accidents since they come out to hunt at night.

However, the biggest threat to Tasmanian Devils is a disease called Devil Facial Tumor Disease, or DFTD. It is a very rare but very contagious form of cancer. It leads to lumps around the Devil’s face and mouth, making it hard to hunt or eat.

Devils who contract DFTD can die within months. It also spreads through biting, which commonly happens in fights while feeding or during mating season. In some areas, almost 85% of the Devils already have DFTD. Scientists are working hard on a cure for this fatal disease.

Are they a danger to Humans?

There is a common myth that Tasmanian Devils can eat humans. However, this is not true. While they have been known to eat the dead bodies of humans, they are otherwise meek creatures. Still, they can bite and scratch if held, and so should be handled with caution.