A white tiger is a Bengal tiger – it is not a species or sub-species of tiger as some people think.

Like all Bengal tigers they used to live in the wild in Asia, particularly in countries like India. Now though, they live in captivity, which helps keep them protected. 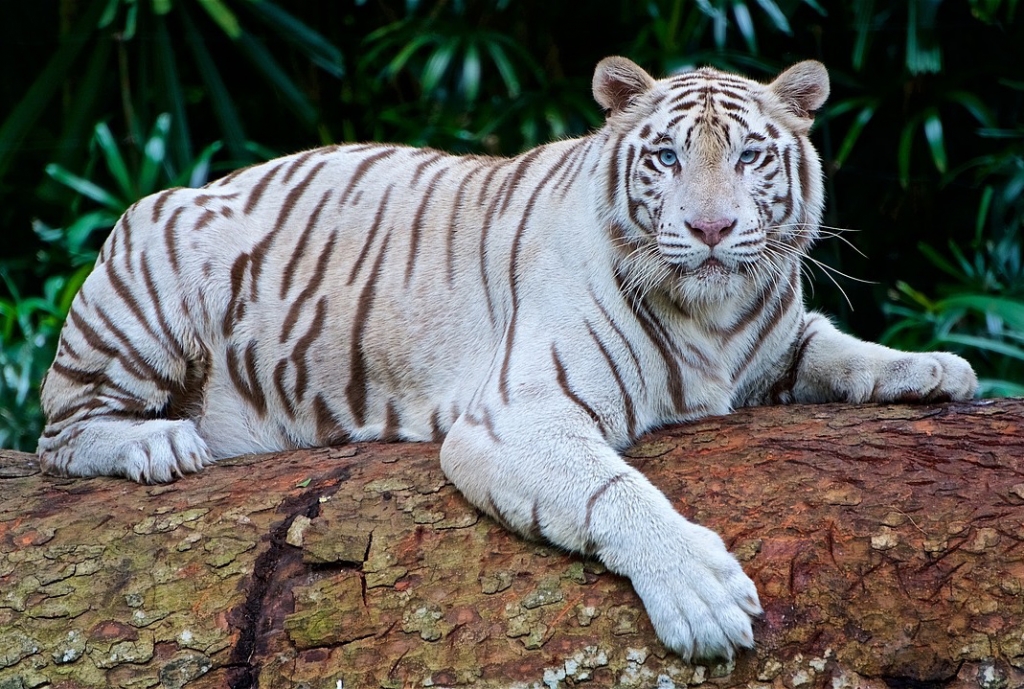 White tigers can weigh up to around 570 pounds, which is a little more than the weight of two giant pandas. They can grow to be more than ten feet long.

They like living in forests and grassy areas, and their stripes help give them some camouflage!

Why are White Tigers White

White tigers are white due to their genes, or their genetics.

It’s also not the albino kind (which is a form that lacks hair and skin color). For a white tiger to be born, two Bengal tigers with specific recessive genes have to mate.

Their white fur is caused by an absence of pheomelanin, a pigment found in the normal orange tigers. This, however, is exceedingly uncommon, occurring just once per 10,000 births.

Their coat darkens when the weather becomes colder. When exposed to low temperatures, the White Tiger, like Siamese Cats and Himalayan Rabbits, produces an enzyme that induces a response in its fur, turning them darker.

The weaker immune system associated with their genetic coloring is thought to be the reason. 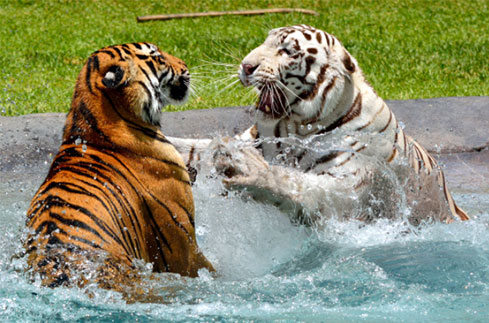 The face of a white tiger is similar to that of any other Bengal tiger. They are only different when it comes to their color. The fur on their face is white, meaning you can easily tell them apart from other Bengal tigers.

A white tiger also has very intriguing eyes – they are sapphire blue which combined with their white coat, makes them look very attractive and fascinating. 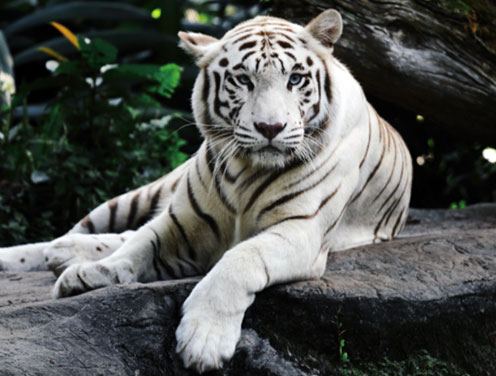 White Tigers have also been seen to grow quicker than their orange counterparts. They are larger from the moment they are born, and this continues until adulthood. When they are 3 years old, they are considered completely developed.

Where do White Tigers live?

Like all Bengal tigers they used to live in the wild in Asia, particularly in countries like India. Only 12 white tigers were seen in the wild throughout the twentieth century. Now they live in captivity, which helps keep them protected. 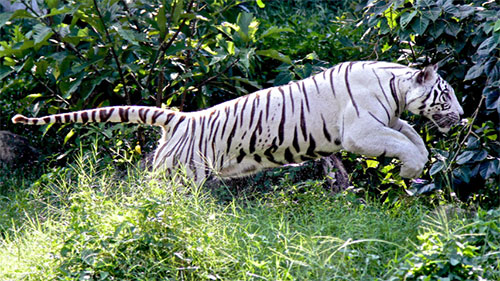 When white tigers were first discovered in the wild, they shared the same habitat as orange Bengal tigers. Its primary habitat consisted of areas of the jungle with plenty of food, water, and trees.

Tigers have historically inhabited a wide range of habitats, including tropical rain forests, savannahs and mangroves.

When compared to the usual orange Bengal tiger, white tigers are more muscular, stronger and moreaggressive. 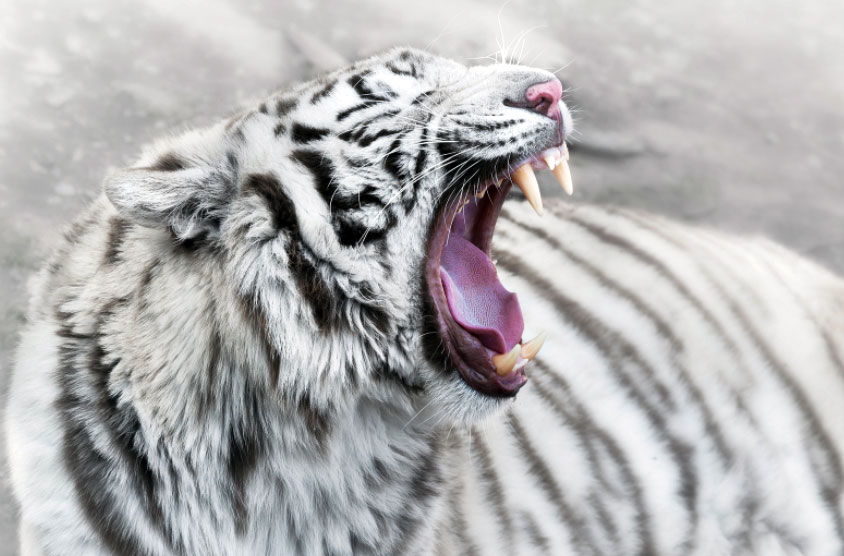 The white tiger, like all other tigers, is a solitary animal that lives in its own territory of around 20 square miles.

They are diurnal (active during daytime) but most of their hunting is after dusk.

How Long do White Tigers Live

In the wild, tigers usually live for around 10 years. Since almost all white tigers live in captivity, they live longer, for around 15 years.

What do White Tigers Eat

The white tiger, like all other tigers, is a carnivore, which means it hunts and eats other animals. 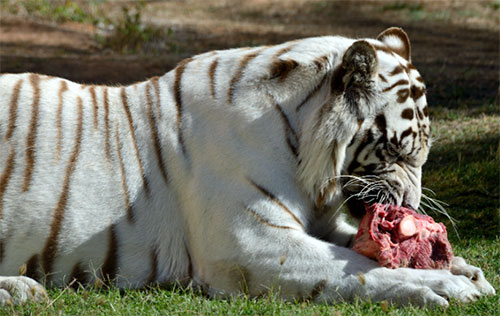 There are no white tigers living in the wild anymore, but when they were in the wild more than a hundred years ago, they hunted just like orange Bengal tigers.  They hunt animals at night, approaching gently so as not to be noticed.

White tigers in the wild mostly hunted herbivores like deer, goats, buffalo, wild boar, baby elephants and baby rhinoceros. If they are hungry and unable to find herbivores, they also kill and eat leopards and wolves.

Tigers don’t eat stale meat and have a strong preference for freshly killed animals. They can consume 40 pounds of meat in a single feeding.

What are Snow Tigers?

Snow tigers are not a species of tiger but are actually white Bengal tigers. Some people refer to tigers who live where it snows, as Snow Tigers, but that would be Siberian Tigers which are also known at Amur Tigers.

In 1561, the very first sighting of a white tiger was documented in India in Akbar Nama (a chronicle maintained by the Mughal King Akbar).

White Bengal tiger develops faster and is heavier than the conventional orange-colored Bengal tiger. It is the second largest tiger, smaller only to the Siberian Tiger.

The white tiger’s peak speed is 60 miles per hour.

Each tiger’s stripes are distinct from those of other tigers. They aren’t simply fur-deep either. If you shaved a white tiger, you’d notice that the stripes were still visible on their skin.

Mohan is the most well-known white tiger to be discovered in the wild. All 200 white tigers in captivity today are believed to be descended from Mohan.

Now, why not explore some more fun animal facts? 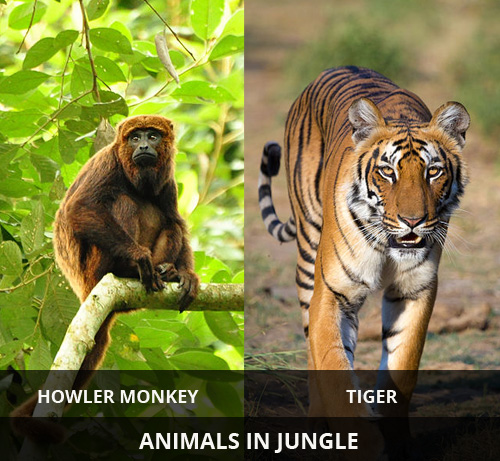